Chart 1 The tide has turned 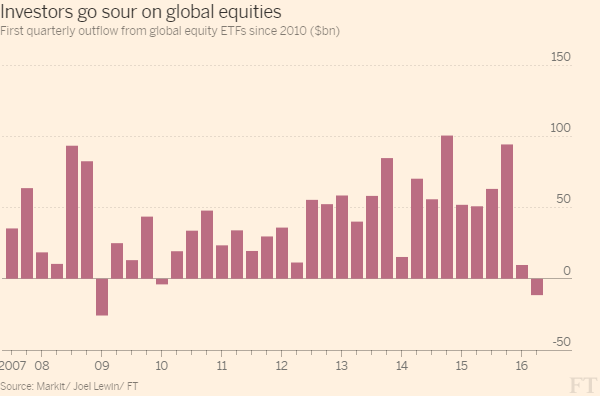 The Financial Times has been diligently reporting statistics that support what some of us have been sensing would happen sooner rather than later. Chart 1 shows the first quarterly outflow (about $10bn) from ETFs since 2010 and yesterday the FT ran a story revealing an even bigger outflow from all equity funds (including ETFs) of $90bn, updated to last week. There are certainly plenty of things to fret about and the latest Global Risk Survey by Oxford Economics shows that slowdown in China maintains its lead over other risks. Intriguingly, two ‘new’ risks (new to the survey anyway) are clearly troubling investors: Emerging Markets turmoil and unconventional central bank policies. I am certainly in sympathy with the sentiments depicted in Chart 2 but, without wishing to detract in any way from the survey’s usefulness, would have put stagnation in the Developed Economies up there as a risk alongside China.

Chart 2 Plenty to worry about 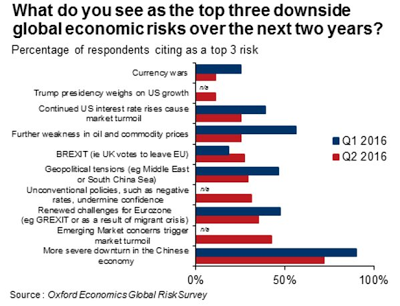 Last week, China published more data than even an infinite number of economists can argue over all at once but much more interesting was an interview in the official People’s Daily with an anonymous ‘authoritative figure ’, which suggested that the high command means business about structural reforms even if this means lower growth. The imagery of an ‘L’ shaped GDP chart rather than ‘V’ or ‘U’ points to acceptance of a prolonged period of constant growth. Debt is clearly now a concern to the authorities as is the slow pace of supply side reforms and this suggests at least some of them do not believe Mr Xi’s targets can be met. Of last week’s data only 10%+ year on year growth in Retail Sales and Industrial Production of 6% are compatible with the 6.5% growth target and they contrast starkly with the continuing slide in both Imports and Exports (see Chart 3) and the recent trend in PMI surveys.

Chart 3 China still on track, then?

Is Goldilocks alive and well in the US?

The US did offer some better news on Friday as the Reuters Thomson/University of Michigan Consumer Sentiment Index broke a five-month sequence of lower readings to bounce back to where it was last June and well above its long-term average. This appeared to be supported by strong Retail Sales in April, up over 1% on March and 3% on April last year. However, more detailed analysis

(see Chart 4) suggests that the increases were not broad-based and were dominated by motor vehicle and gas sales. This was good enough, however, to give the Atlanta Fed Nowcast for Q2 GDP growth another leg up to a ‘hot’ 2.8% annualised. This week’s Industrial Production and CPI Inflation numbers may ‘cool’ things down again. Many investors seem to hope this  ‘Goldilocks’ economy will persist, whereby there is enough growth and inflation to keep things moving but not enough to persuade the FOMC to hike interest rates. The latest minutes out this week should show that Dr Yellen et al cannot think of a better idea.

Back to the Bad Old Days

One of the ironies of the current run of poor UK economic data is that it is so reminiscent of the dark days of the 1960s, 1950s or even the 1930s before we were swallowed up by the EU. If this is the country that so many well-heeled City folk want to have back, they are definitely not welcome to it However, they probably are hankering after a time when the French feel ashamed, the Italians humiliated and the Germans guilty. Certainly, a time when Canadians knew their place and did not politicise their role by publicising inconvenient statistics such as those shown Chart 5 from the Bank of England’s latest Quarterly Inflation Report. Last week’s reports of a record Trade deficit, falling Manufacturing Output and (from the NIESR) faltering GDP made dismal reading. This week higher inflation than most other EU countries, subdued average earnings and dismal CBI industrial orders will add to the gathering gloom. Employment and Retail Sales data may still be bright spots but Gavyn Davies and his colleagues at Fulcrum Asset Management reckon that economic activity may have seized up altogether.  Uncertainty over the outcome of the referendum may be a lame excuse for businesses to postpone hiring, investing or even just purchasing regular supplies but it seems to be one they are willing to use as clouds gather globally. The hiatus will not last but in the meantime look out for all the finger-pointing! 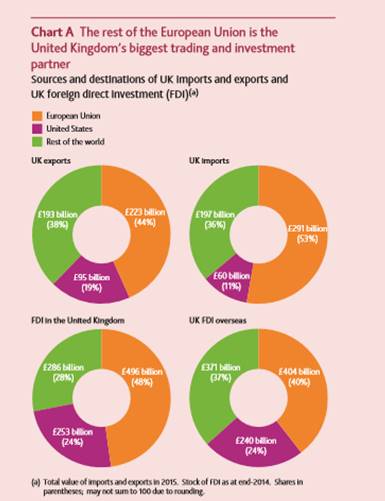 Who would an investor be?

John Bunyan definitely did not have C21st investors in mind when he wrote his stirring hymn but some must feel a bit like pilgrims seeking salvation in a world full of financial hobgoblins and foul fiends. Top line revenues, profit margins and earnings remain the problems for equities with which markets in the Developed Economies are struggling again this month. It is too simple to jump on the ‘sell in May’ bandwagon as most markets have never regained their peaks of 2015 and selling now would be to add to the pain. Spain ((political uncertainty), Italy (banks’ loan losses) and Japan (yen strength) are the worst hit but the Nasdaq Composite is down nearly 10% on its high point last July. Moreover, even some prime stocks are oversold already. Meanwhile, the hunt for yield has taken bolder investors into Emerging Markets, excluding the rigged and ruinous mainland China markets. Even this has not exactly been a raging success if one looks beyond Brazil but there has been some parallel life in Canadian and Australian equities.

Bonds seem back in demand driven by a combination of resignation that interest rates will remain low indefinitely and a renewed outbreak of ‘greater fool’ punting on European sovereign bonds. US Treasuries and, more surprisingly in view of the Brexit debate, gilts fall largely into the first category as they still offer yields of over 1% on maturities over 6 years and have consolidated in May their average of around 0.5% in lower yields for longer maturities. Much scarier have been the wild swings in yields on EZ bonds, including German bunds where yields are back to negative for maturities up to 7 years.  Meanwhile, the ECB hoover is revving up to buy corporate bonds.

Then, of course, there is nothing like a punt on commodities and FX! Oil is the current favourite with gold and silver taking a step back. Copper seems to gained and lost favour. The dollar is making a come-back just when it was being written off. Chart 8 shows how quickly money is made and lost in commodities futures.  This is not a market for the attentive…..come to think of it, it is not really a market for anyone other than the professional traders. Even the hedgies are hurting!

Chart 8 Pay attention at the back