Chart 1 Is the price right?

A dramatic week kicked off with the OPEC meeting in Doha failing to decide on freezing output although, of course, the really important bit would have come later with an agreement that sticks if it can ever be reached in the first place. Chart 1 shows yet again the leverage of Saudi Arabia and Iran, if only they could ignore their political rivalry (Iran did not even show up in Doha). It also shows how much producers have been suffering since the golden years 2011-14, most of whom, with the major exception of the US, must be desperate for some sort of deal. Their best hope is prices’ stabilising in the range of $40-50 as the Saudis are in a hurry to get the black stuff out of the ground before world governments get serious about fossil fuels. Then, of course, there is Wall St, which having cleaned up with forecasts of a top of $150 and a bottom of $20, will want to catch everyone out again. In the immediate aftermath of this set-back, $40 looks in danger.

The Brazilian ‘House of Cards’ screenplay has reached a new melodrama with the lower house of Congress voting on the impeachment of the beleaguered (and less than competent) President Dilma Rousseff. Since February, equities and the real have been rapturously anticipating a clean-out of the bad guys but profit-taking if not disillusionment could send them into reverse if everyone concludes that there are no good guys.

On Tuesday, the New York State primary may not prove as decisive as was originally thought with both Trump and Clinton stumbling a bit. With Congress increasingly polarised into gridlock, highlighted in fascinating BBC documentaries in the Obama White House, it may not matter much who ends up winning in November. Somewhat depressingly, all four contenders are trade protectionist to varying degrees, which is, alas, one area where they definitely will be able to work with members of both parties in Congress.

Meanwhile in Europe, SuperMario has another spar first with his critics within the ECB Governing Council and afterwards with the increasingly sceptical financial press. Apart from insisting that all is going to (his) plan, he probably wants to keep his head down while the Germans squabble amongst themselves over ECB independence vs. its ‘reckless’ policies. Mr Draghi has, however, got new fans through including Greek bonds in his asset buying spree, which should help kick the Greek can down the road while the IMF and the Germans quarrel and the Tsipras government wriggles. The fact remains that the Greeks cannot meet all their targets even if they wanted to. This could end awkwardly for Mr Draghi, albeit not as much as will the European banks’ recalcitrant perversion of his asset purchase programmes through their buying ever more government bonds and cutting back on lending. Mrs Merkel faces her own uncomfortable week over her apparent kowtowing to President Erdogan of Turkey, which is threatening to overshadow the coup of securing both CSU and SDP support for her bold and enlightened approach to integrating immigrants.

Chart 2 Waiting for the Boris Bus

Here in the UK, there also seems to be a ‘House of Cards’ building with the Brexit campaign seemingly overtaken by a struggle for the keys to Number 10. The venerable Kenneth Clarke gave the game away when he said Mr Cameron would not survive in office for 30 seconds if he lost the referendum while the less venerable Europhobe MP Bernard Jenkin reckons the Tory Party would overthrow him if he won. Who needs enemies with friends like that? (A matter to be pursued by Nick Robinson on TV on Tuesday evening, by the way). Jeremy Corbyn is in on the plot too as his ‘wholehearted’ conversion to EU membership neatly papers over the other divisions in his own party and should (coincidentally?) also help the Remain cause. However, the real drama will start with Mr Johnson’s setting off on his Boris Bus Comedy Tour bound for destination Downing Street while President Obama (also very witty on occasion) gets there next week to help out Dave, their ‘common’ mate. The publicity given to cricket legend Sir Ian Botham’s support for Brexit adds some piquancy but so far, as Chart 2 (from my mate Neil Lovatt) confirms, the punters are unmoved. Meanwhile, the Treasury is certainly not playing it for laughs in issuing a much-needed warning to those of us who are neither anarchists nor romantics.

Chart 3 China to the rescue? 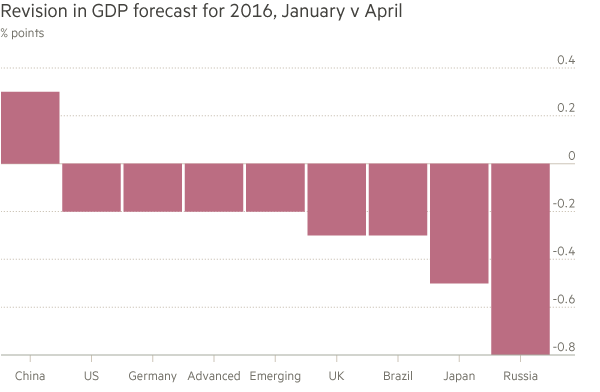 Last week the IMF published their latest quarterly forecasts for world output and individual country GDPs, which told a familiar tale of slowing growth and further downward revisions. Economic forecasting is, of course a mug’s game but the IMF usually manages to get the direction right and, of course, provides insights into a comprehensive list of economies, albeit subject to local political sensitivities. The latest big ‘surprise’ of upward revisions to China’s GDP somehow managed to reflect the government’s official 6.5-7% target at least for 2016. Only India at 7.5% is expected to do better while no other economy of any importance is forecast to grow by more than 2.5% in either 2016 or 2017, with Japan back in recession next year.

As luck would have it, China has just published data which shows Q1 GDP to be bang on target at 6.7% annualised, albeit down from 6.8% in the previous quarter. In fact, it has to be said that almost all the official numbers from China are felicitous to a surprising extent, including not just GDP, Industrial Production, Retail Sales and Trade but also FX Reserves and even the Producer Price Index. In contrast, the US economy is not ‘doing its bit’ with a seventh consecutive month of negative changes in Industrial Production and faltering Retail Sales. Chart 4 from Jeffrey Snider of Alhambra Investment Partners shows a jagged but generally declining trend in Retail Sales excluding Autos.

Chart 4 US consumers not to the rescue!

This week attention switches to the EZ and it is all about surveys, especially from Germany and including the ZEW (Economists), IFO (Business) and the flash Manufacturing and Services PMI surveys from Markit. Not much can be expected from any of them.  Meanwhile, following last week’s dire Manufacturing Output numbers, the UK puts a better foot forward in the form of Unemployment and Retail Sales. Even the Public Finance numbers should be quite favourable, albeit confirming that the Chancellor has missed his target for 2015-16.

From macro to micro

One of the tougher parts of my job is being obliged to descend from the Olympian heights of macroeconomics to mundane microeconomics. Last week took me to the Isle of Purbeck in Dorset where I was obliged to study in depth various restaurants, bars and (cream) tea rooms, all of which were full to capacity and charging prices to warm the hearts of members of the BoE’s MPC. Even the historic buildings and the local steam railway seemed full of visitors and I was assured on my my diligent enquiry that the Easter holidays had been even busier. I also should report that many of the serving staff were not……er….English. Figure 5 shows the view from my desk in Dorset, where I failed to write Economic Insights last week. 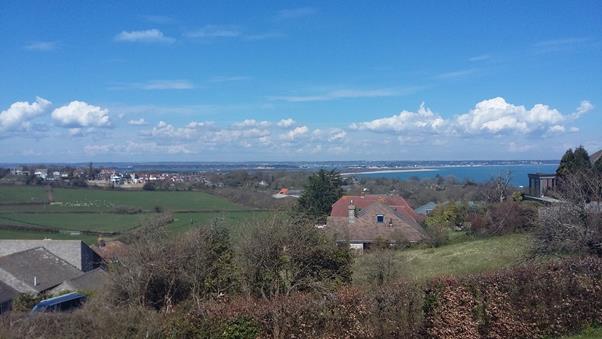