It ain’t over ‘till it’s over

It seems appropriate to bear in mind Yogi Berra’s (pun not intended) words of caution after Friday’s unexpected bounce in global equity markets. Most markets are now in bear (oops!) territory and the MSCI world equity index hit its lowest level in more than two and a half years at 20.18% below its all-time high close on May 21st 2015. Two significant exceptions are the S & P 500, which is down a ‘mere’ 12.7% from its peak on May 21st last year, and the FTSE 250, which is 15.5% below its peak on June 9th. In fact, very little has changed fundamentally over the last few months: the global economy is still slowing, oil prices are still slumping, refugees are still fleeing from Syria, EU leaders are still falling out with each other and US politics is as internecine as ever.

What has changed is market sentiment: investors seem to have given up on denial and started to face up to two developments that have been obvious for at least the last year without even the benefit of insight:

It is not yet clear, however, that investors realise that there will be no dramatic bounce-back from the current slowdown with the corollary that share prices will not bounce back either. The overnight surge in Japanese equities looks like a classic case of (speculative) hope triumphing over experience!  One does not need to be a bear to expect markets to be difficult for the next several years and it will be hard to make any money until investors start to differentiate properly growth companies from the rest. Even then, there are no simple solutions but my colleagues and I intend to make a start at our Client Forum on February 23rd.

A deal should be struck at this week’s EU Summit and apparently Our Dave is packing three shirts as a sign of his determination to negotiate to the end. We must hope so because it all seems to be getting a little contrived. There has surely never been any question of the other EU countries pushing out the UK or any UK government planning to leave. On that basis, migration, populism, Putin mischief, bank systemic risks and economic divergence are much more serious challenges. With 27 other heads of government and his Tory MPs to placate, Mr Cameron seems to have made enough fuss to allow the former to raise pseudo-objections and enough of the latter to grumble and subside (the diehards will never give up!). With so many challenges, the Single Market may be all that can be salvaged from the current ramshackle EU but only if the UK remains. Now that really would be radical and also ironical.

The great British public continues to ignore opinion polls and apoplectic newspaper articles and bet heavily against Brexit. My friend Neil Lovatt of Scottish has calculated that the probability of Brexit is around 30% and if anything is diminishing.

Chart 2 Betting against Brexit since January 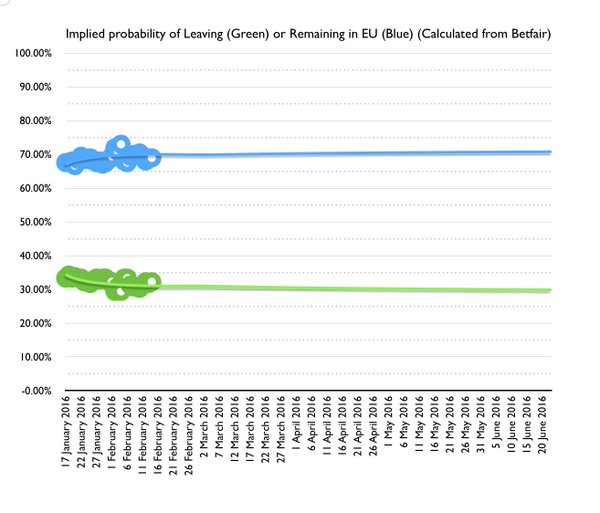 Meanwhile, the fur is really beginning to fly in US politics. The significance of the New Hampshire primaries is that in boosting two anti-Washington candidates, Messrs Trump and Sanders, Wall Street and the Fed are now faced with the possibility-not more as yet-of a hostile White House. That could be a veritable Pandora’s Box if factionalism increased in Congress. The death on Saturday of the recalcitrantly reactionary Supreme Court Justice Scalia has poured petrol on the flames with the various Republican candidates urging the blocking of any Obama nominee as a replacement. It is quite something for the Grand Old Party to seek to undermine the Constitution for the sake of personal and party advantage. The unseemly GOP rows may yet hand victory to Mrs Clinton.